BESPOKE IDENTITY examines the significance of suiting and personal style at the intersection of gender identity and presentation. The goal? To challenge the misconception that Queer identity is a monolith by celebrating the profusion of LGBTQ+ self-expression and identification.

This profile is dedicated to Hoisum Nguyen, who just obtained her masters degree in Public Health with a focus on Epidemiology and Biostatistics. Unbeknownst to her, I think of Hoisum as an accidental Instagram micro-influencer. Fusing androgynous sprezzatura with an unrivaled political consciousness, she powerfully embodies the core principles of visual activism. Meet Hoisum: 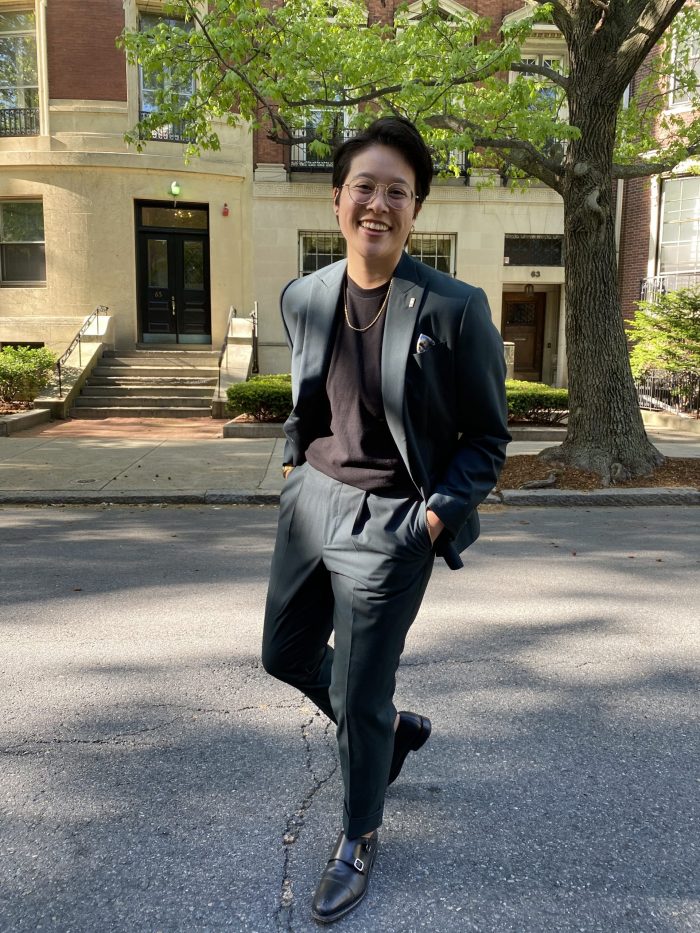 On the topic of Hoisum’s pronouns and self-identification:

HOISUM: “I use she/her pronouns. I consider myself to be androgynous; I think because I’m in a professional space most of the time, it’s easier that I identify as a woman. But I also feel like my androgyny exists within a binary, so I don’t want to take away that space from my nonbinary siblings. When I was younger, I took issue with being seen as a girl, but I’ve learned to appreciate my body in all its androgynous glory.”

One of the first things I noticed about Hoisum is her sanguine demeanor and unaffected self-possession. Her confidence is intrinsic, entirely her own. But that wasn’t always the case. Here’s what Hoisum had to say about her evolving relationship to femininity:

HOISUM: “You get to a certain age, like 12, where your breasts and hips start to grow, and that didn’t sit well with me. Back then I wore baggy clothes, which fit into my budding interpretation of masculine presentation. But once I got older, I realized that women can be strong however they see fit. A woman can have broad shoulders, a four-pack, and developed quad muscles. That allowed me to expand my understanding of gender. When I got into boxing at the age of 20, my shoulders acquired a new muscle definition, my chest flattened out, and my overall build minimized the look of my hips. The way I saw my body was entangled in all these societal notions that a woman couldn’t and shouldn’t have physical strength. That also had a lot to do with Asian beauty standards, which perpetuate a docile hyper-femininity that holds muscle definition and short hair in contempt. Once I got older, I detached myself from all those preconceived notions. I can be a woman and be strong. To me, masculinity is the way we assume agency over our bodies, our careers, and our choices in life. Once I started seeing my body change, I became less concerned with the fact that I had breasts. I just wanted to get into street fights and win!”

We get so caught up in social, political, and biological definitions of gender or sex. The way I see it, Hoisum wasn’t looking to reject her womanhood; she was grappling with the restrictions and limitations placed on women’s self-expression. She now feels free enough to redefine femininity and masculinity on her own terms, particularly within the context of her relationship with her father:

HOISUM: “My dad was never really around when I was a kid. My mom was effectively a single mother; business-oriented, no nonsense. When she passed away in 2016, my dad started showing up more. He assumed his fatherly duties more, but by the time he came around, I was already very open about being gay. He actually didn’t give me too much trouble about it. He said that as long as I was happy and fulfilled, he was fine with it. One day we were driving in the car and I told him I was gay. He asked “Is it a phase?” to which I responded “Is the color of your skin a phase?” My stepmother, who’s very liberal, has helped him become much more attuned to matters of gender and LGBTQ+ identity. My father knows I’m gay and he knows that’s not changing, ever. He’s actually grown to accept it in his own way as an immigrant Vietnamese man. For example, when he saw me in my Ao Dai, a traditional Vietnamese garment that exists in male and female iterations, he commented that he really liked the feminine Ao Dai’s bright crimson hue and that if the masculine garment was red instead of a muted beige, he might like that more on me. I interpreted it as his subtle way of addressing how he views my gender identity and expression as nuanced and fluid, which was so gratifying.”

Below, Hoisum rocks both a men’s and women’s Ao Dai: 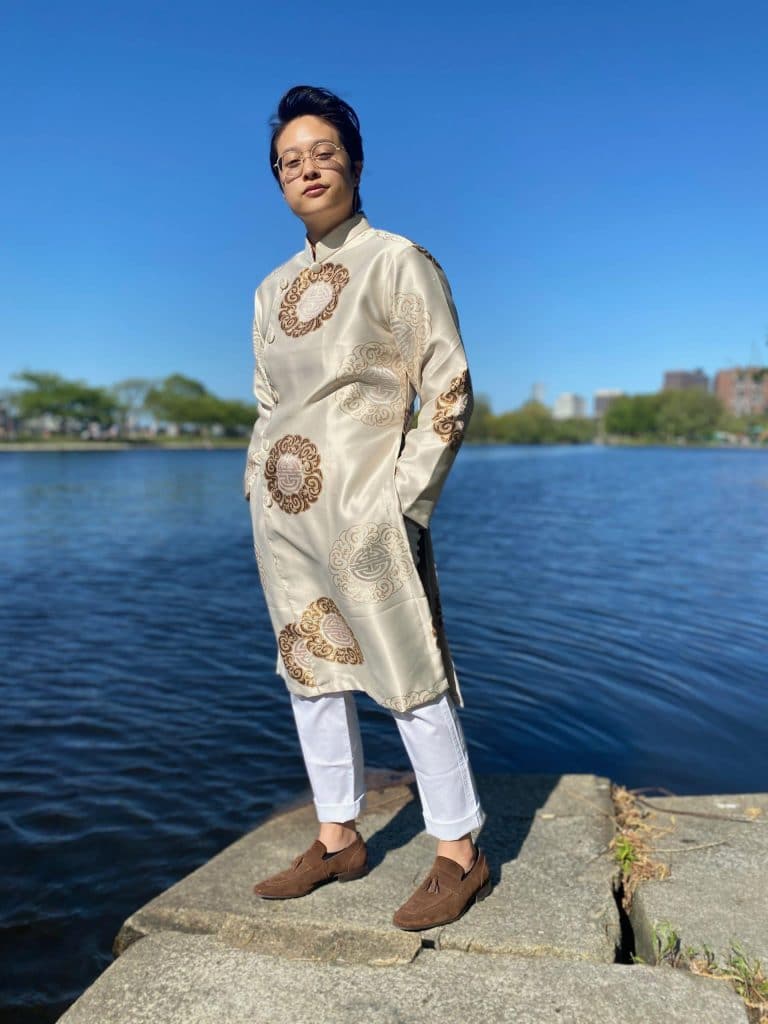 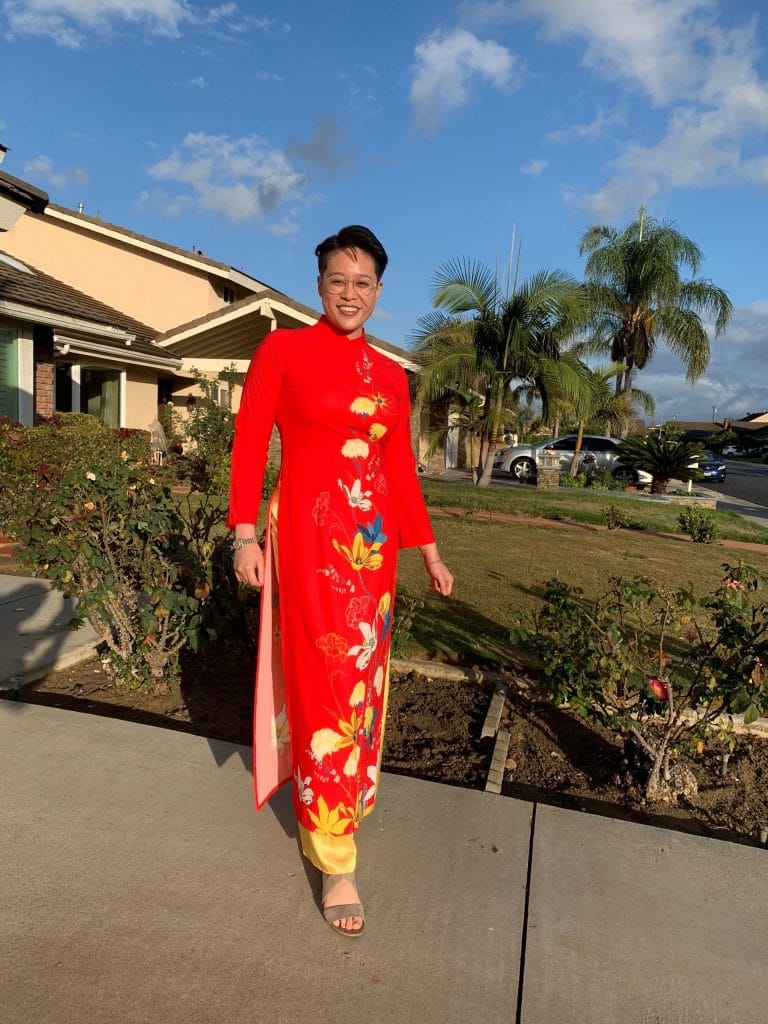 Hoisum, shapeshifting dandy, queen of the epicene. Her superpower? Chameleonic androgyny. Her kryptonite? Side tabs and suspenders.

HOISUM: “Clothing is so much more difficult to navigate for masculine-presenting queer people. You want something that fits your perception fo masculinity AND fits your body correctly. It’s not just about wearing “men’s clothing.” You have to pay attention to tailoring and how colors can look either too harsh or too soft. Early on in undergrad, I worked for a suiting company in San Francisco. I was super into shapes and how we attribute gender to certain silhouettes. Triangles and lines are supposed to make you look more masculine, whereas circles and squares are supposed to look more feminine. Once I got older and started making more money, I started finding queer-oriented suiting brands like The Tailory. But it’s about more than just playing with shapes. How can I play with different sartorial elements that are coded as masc? Side tabs, suspenders, double pleats, and two-inch Italian cuffs can make or break a look. My style is pretty minimal, but I pay a lot of attention to the minute details that often go overlooked. Details people might not notice at first glance that conveys a studied effortlessness. Sprezzatura is a style.”

A superhero for the new age, Hoisum forgoes the prescribed spandex bodysuit and trademarked insignia, opting instead for a slew of carefully-curated wardrobe staples that convey casual elegance:

HOISUM: “One of my staples are my black leather double monk straps. I take care of those like I would my Rolex – which was a gift! I had saved up for a year, telling myself I could reward myself if I got a job that allowed me to live comfortably. Whenever I want to feel powerful, I wear my black leather double monk straps. The amount of phone numbers I got because of those shoes… stepping into a club with them I feel like my middle name is Zaddy. I take care of them like I would a baby. I adore this caramel brown suede bomber that I got in Spain. It’s so beautiful. I wear it in so many of my Instagram pictures and I love it because it gives you that perfect aviator feel. You can wear it up or wear it down and it will look good every time. I love my classic old school, low cut Vans. I even wear my weight training Nikes out with pleated trousers and it’s a look. Denim jackets! You can wear a denim jacket to a fancy dinner or a county fair and still look cute – it’s all fair game. Oh, and I’m in love with topcoats – the longer the tail, the better.” 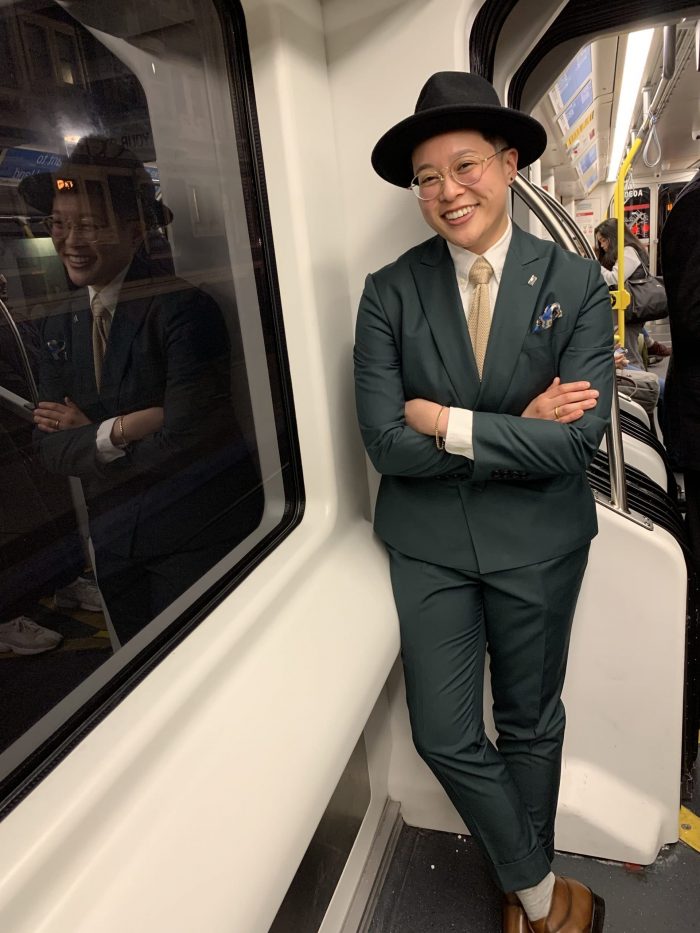 On how socioeconomic status can either restrict or enable fluidity in one’s gender expression:

HOISUM: “I think a lot about socioeconomic status as it relates to gender fluidity and elegance. Realistically, socioeconomic status determines how much time and energy you can expend towards aesthetic mediums like art and fashion. And when people have the privilege to think about aesthetics, they’re less limited by clothing’s typical gender associations. “Does this make me look gay? Does this make me look too masculine? Too feminine?” We live in a world where wealth shields you from traditional gender biases, which speaks to the inherent elitism of self-expression. For instance, many mainstream fashion brands maintain a strict partition between what is masculine and what is feminine. But when you look at luxury brands, there’s less of a strict gender divide. Yves Saint Laurent, for instance, creates men’s clothing with a feminine flair for wealthy individuals who have the ability to reject conformity without having to face the at times violent repercussions of effeminate self-presentation. Suiting has the power to act as an equalizer. It is a symbol of power that can be customized to all bodies and forms of self-expression. You can get a suit that has exaggerated peak lapels and plays with the idea of what new wave masculinity looks like on an AFAB (acronym for “assigned female at birth”) body.. Ultimately, gender fluidity and self-expression through suiting shouldn’t be a privilege; it should be a fundamental right, regardless of wealth or status.”

Being cis and/or presenting in a way that is congruent with one’s binary gender identity makes navigating personal style a lot simpler. For many queer people, particularly those who are trans, nonbinary, and/or have a fluid self-presentation, fashion is more than a stylistic choice. It essentially communicates one’s gender, allowing one to either pass unnoticed in society (the goal for many binary trans people) or bring visibility to one’s gender fluidity through a composite of traditionally masculine and feminine visual signifiers. What happens when you add Asian American identity to the equation?

HOISUM: “A lot of the underlying biases to being queer and masc presenting are that I’m more competent than a femme-presenting woman. It’s ok for me to be forthright and self-advocate because men do that. It would be different if I was queer and femme. But the intersection of being queer, masculine-presenting, and Asian is interesting, especially in my field. I work in epidemiology, which involves a lot of data research and analysis. In scientific spaces, Asian women are expected to be more passive and obedient and dutiful. They don’t expect Asian women to speak up as much, but f**k that – I’ll always have an opinion. If someone’s being problematic, I’ll tell them straight to their face. For me, the biggest challenge was allowing myself to have a softness and vulnerability as someone who’s masc and Asian. I end up feeling guilty for taking a mental health day, and I have trouble letting people know when I feel overwhelmed with my work [undoubtedly as a result of the Model Minority myth, which holds Asian Americans to a higher standard of success and discounts the differences in oppression faced by Asian Americans of different ethnic backgrounds].  Asking for help is difficult for me. The way I’ve navigated that is by unraveling all of these biases associated with being Asian. Our culture teaches us that we can’t express our emotions as much, and if we do, we’re placing our individual selves over the collective. The collective is important, but the individuals make up the collective. Both are equally valuable.“