The Tailory was honored to take part in the NYU Costume Department’s 2020 exhibit, The Tuxedo Redefined. According to the curators, “The Tuxedo Redefined identifies ways in which the tuxedo has been formally and conceptually incorporated into women’s dress, and why this ensemble retains an element of subversion in contemporary fashion.” On display besides Chanel’s Fall/Winter 1987/88 Tuxedo Dress was our Fall/Winter 2015 Backless Tuxedo. It was extremely humbling to see our suit next to one of Karl Lagerfeld’s creations. See the abridged exhibition caption below:

“…At The Tailory New York, Yang creates clothes for the person who will wear them, adapting male suiting pieces into custom designs for a diverse clientele that includes men, women, and non-binary individuals.  This women’s tuxedo showcases ways that the traditionally masculine uniform has evolved when fashioned for a variety of individual body types. Though the jacket front appears to be classically tailored with satin lapels, the back of the garment incorporates an atypical cut-out, that adds a uniquely feminine touch to the otherwise classic suiting style.  By incorporating this display of skin—traditionally reserved for womenswear designers wanting to create a sense of sex appeal in their work—with the more traditional tailoring of the jacket, The Tailory redefines the sensual potential of the tuxedo.” 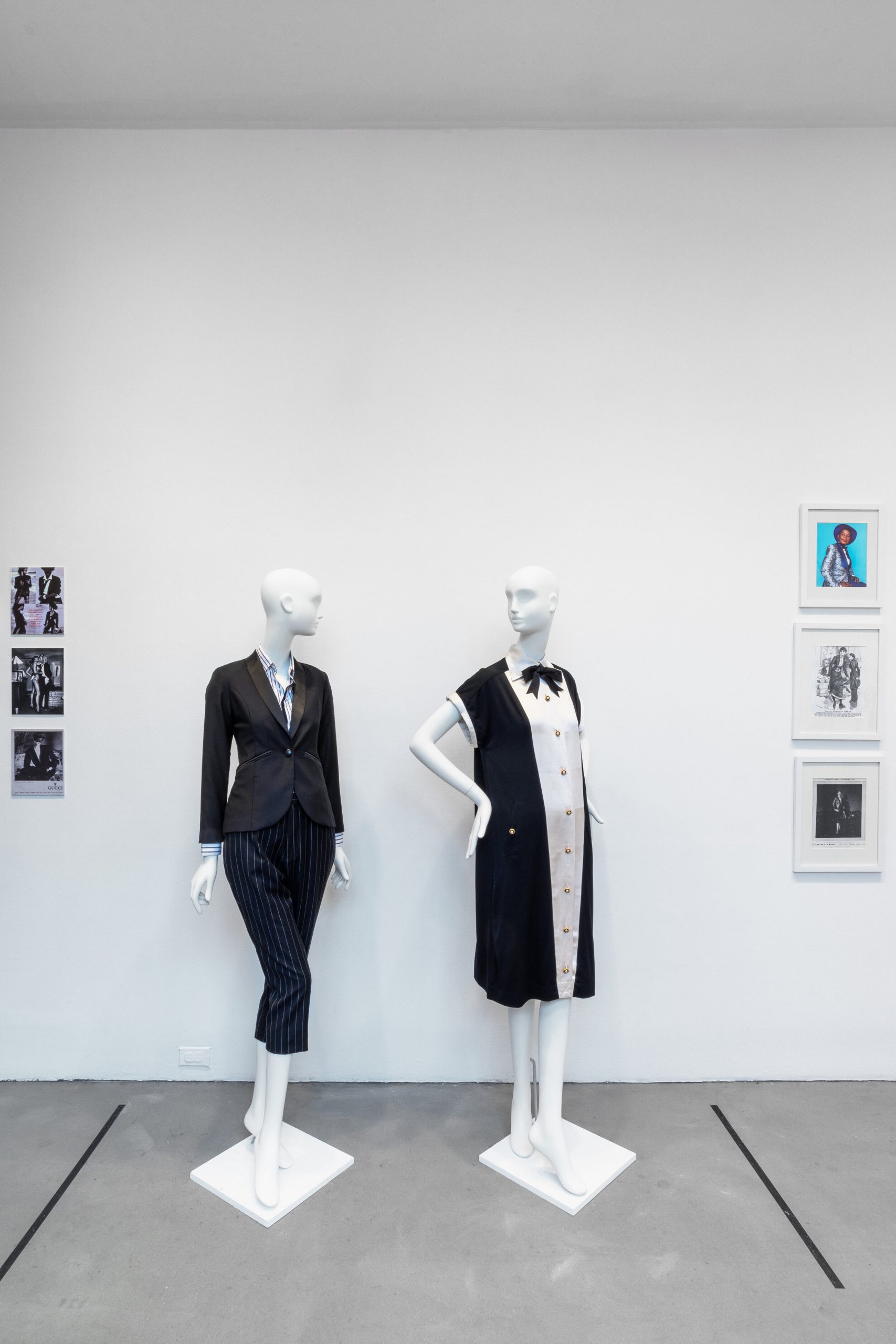 Yves Saint Laurent was responsible for initiating the recent wave of women’s tuxedos on the red carpet with Le Smoking in 1966. While the tuxedo’s design was unmistakably intended to emulate men’s tuxedos, Le Smoking’s shape and cut is distinctly feminine. In our opinion, Le Smoking’s power to shock and scandalize stems from the juxtaposition of male and female influences within the same garment; a woman in a men’s black tie staple is a symbol of sexual liberation, of a woman taking charge of her sexual agency with the confidence, assertiveness, and lack of reservation traditionally conferred to men. Ironically, we also see the sexualization of the tuxedo for women as a way to render it more palatable to the general public. By undercutting the performance of masculinity with notions of female sexuality, the garment’s power relies on a binary dynamic that is easy to dissect and appreciate.

For masculine-presenting women, trans men, and non-binary individuals, the tuxedo possesses the ability to affirm one’s gender identity and/or gender presentation. Yes, the idea that traditionally masculine attire grants access to and mobility within male-dominated spaces still remains, but it carries an added personal significance. Many of our masculine-presenting queer clients wear a tuxedo not because they prefer it to wearing a floor length gown, but rather because it is inherently linked to their identity.

We have noticed a new trend pertaining to how women wear the tuxedo. It no longer has to be sexualized to be subversive or powerful. Generally speaking, when a tuxedo is figure-hugging or worn bare-chested, asserting a woman’s femininity by bringing it to the foreground, it is done in the aim of being more palatable. Although we believe a woman can choose to wear a tuxedo in whichever manner she likes, wearing it in a sexual manner actually carries an element of conformity.

Our Founder and Creative Director Shao Yang (RIGHT) and Marketing Manager Valerie Maruani-Bacac (LEFT) posing with the exhibition mannequins like the two suit geeks they really are.

At The Tailory, we want to give women the choice when it comes to how they wear a custom tuxedo. For example, the button stance on a tux can be carefully calculated to be worn with both a shirt and bare-chested depending on the occasion or the wearer’s mood. In a similar vein, our backless tuxedo gives women agency when it comes to their fashion choices. It can either show some skin or be worn with a shirt or blouse underneath. When worn more literally, with a pleated dress shirt and cufflinks/studs, the tuxedo can actually be more subversive. Not because it obfuscates or disguises a woman’s femininity, but because it removes gender from the conversation by treating the tuxedo with an attention to detail and reverence for convention often linked to black tie dressing. The suit and the tuxedo is symbolic not of male-derived power, but of a woman’s desire and the ability to determine how she presents herself to the world.

Book an appointment below to define your tuxedo identity.