BESPOKE IDENTITY is a series of profiles examining the personal significance of suiting in the context of intersectional gender identity and/or presentation. The goal? To challenge the idea that the Queer experience is a monolith.

This profile is dedicated to Diane Chen, a nonbinary actor based in NYC, and a dear friend of The Tailory. Our conversation was a fascinating one, ranging from how they use fashion and binders to minimize their feelings of gender dysphoria to what it’s like to play a cisgender character as a nonbinary actor. But first, meet Diane: 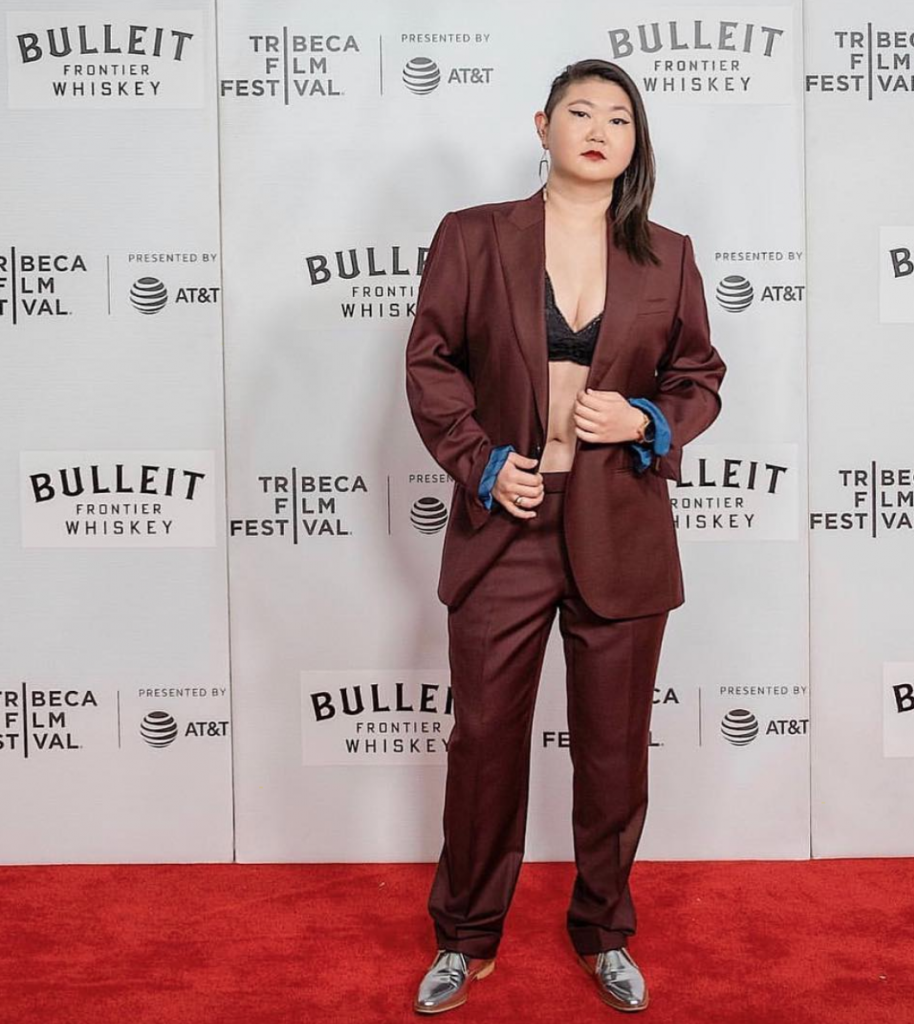 We kicked off our phone call by discussing how Diane uses fashion to express themselves and minimize feelings of gender dysphoria – because nonbinary people CAN but DON’T HAVE to experience gender dysphoria, contrary to popular misconception.

DIANE: “85% of my gender dysphoria is centered on my chest. That has always played a huge role in my feelings about clothing. I felt like I had to squeeze my body into clothing I was hoping would do something. I did try to wear women’s suits in high school during a mock trial but it didn’t make me feel too much better, which was very confusing to me. I didn’t know it was about my chest and the shape of my body. I’ve only been wearing a binder for 2-3 yrs, and it’s been game-changing. I have 32-24 double Ds, so when I bind it is both euphoric and dysphoric. Even when I bind, it looks like a small uni-boob, which sucks. It reminds me that my body is not quite what I want it to be. It’s like a B+. So I’ve found ways to deal with that. At first, I thought I would just wear men’s clothing, but I wasn’t picking the right shapes and silhouettes to accommodate my body. I hate it when I wear things that accentuate an hourglass silhouette – it just feels so wrong.”

DIANE: “My goal is bisexual frat boy president with a heart of gold. Like, he is the guy who calls out his bros when they’re being misogynistic or gross. He does the reading, but he’s still a bro. Colors are like an accessory adorning a neutral black base. I constantly think about how I can use color to express myself. I’ve been into a lot of neons lately. They feel very genderless to me, even neon pink feels masculine to me for some reason, I don’t know why.”

Part of the reason these very bright colors feel genderless is because very few people even dare to wear them. They haven’t really trickled into mainstream men or women’s fashion, and thus they haven’t been strictly categorized as either masculine or feminine. Bright colors are also a sign of courage and strength, which is why they were central to our Technicolor Subculture collection, which Diane wore for the Queer Film Festival at the University or Oregon last year. Take a look:

DIANE: “I don’t think you understand quite how grateful I am for you pushing my style boundaries. I have an idea of my personal style, but sometimes I still feel like that little kid who’s afraid to wear something crazy out of fear of being ostracized. But your encouragement and positive feedback gave me the courage to rock the neon suit from Technicolor Subculture. If you were to ask me what is the one suit I love the most, it’s that winter floral suit that Danielle Cooper wore. I’m telling you, when I saw that on your Instagram, I f**king ascended. That is it! That print is my gender. I always thought if I were to get married or do something special in a suit, it would be a dark emerald suit with some sort of small flourish.”

Diane also explained how they approach playing cis women characters and the importance of their activism as a public figure.

DIANE: “I did a play last year where I had to play a woman character who wears a dress, and the director suggested that I wear my binder under the dress. When I did it, I realized this was what I wanted to look like when I was being forced into dresses when I was younger. I thought the plunging V neck was the perfect mix of femme and masculine for some reason, but I couldn’t do that with my chest. I’m looking forward to wearing a dress in public with my binder on. Not to look more feminine, but to exist as myself in a traditionally gendered garment.”

This was particularly revelatory to hear. What first seemed like an act of conformity that went against the essence of who they are, but being able to exist as themselves in a traditionally gendered garment allows them to excise the trauma of societal gender affectations. As for playing women characters?

DIANE: “I’m totally comfortable playing female characters. We start with pronoun introductions when we start rehearsals. I’ll say my pronouns are they/them and my character’s pronouns are she/her. I try to keep a very clear distinction in my head. Creating that divide allows for a mental separation between myself and the character. But I’m always surprised when I’m cast as a typically feminine character. It makes me think whether people perceive me as feminine despite the very masculine energy I think I exude. I could have been very private about my intersectional identity, but as an actor, I’ve had to be more public about who I am. Speaking on panels and events about diversity and representation (which someday I hopefully won’t have to do ever again), but doing that and getting messages from people saying “this is the first time something like this has gotten through to me, now I’m going to go on my own journey to further my understanding of these issues,” that’s why I talk about my journey and evolution.”

THE KIDS ARE ALRIGHT

Lastly, Diane also touched on the topic of gender roles and undoing societal gender norms through their use of language, particularly with children.

DIANE: “Because we live in a society that is hellbent on throwing you in one box or the other, and because physically I’m perceived as female, my pronouns 99.9% of the time are assumed to be she/her. I feel it out; I tend to very overtly and actively use gender-neutral language when I speak to people and hope that has a subconscious effect. The tricky thing is that most of the time I interact with children – I work as a nanny and I also teach baby swimming – which is an interesting place to be. When you’re working in a pool, you don’t really get to control how you present because you’re wearing a uniform of sorts. That’s the point of a uniform: to act as an equalizer and strip bodies of their individuality. What’s more, I can’t wear a binder in the pool. No binder on, hair tossed up on my head. It’s a weird space to be in because there are no visual cues to suggest nonbinary identity. I’m presenting as a woman. It’s really frustrating and disheartening to see just how early we start to push the gender binary by gendering literally everything. You think it’s innocuous, but we’re actually building this really horrible foundation for gendering everything unnecessarily. Like, 3 yr old boys refusing to wear purple goggles. Or a dad will look embarrassed if his son chooses to wear pink goggles. In small ways, I can challenge that, but it’s systemic. Even nonbinary identity has to acknowledge the binary that we’re trying to reject, which is practically a Catch-22.”

Most of the time, parents’ enforcement of gender norms is well-intentioned, coming from a place of wanting to protect your child from a life of hardship. But if that’s who your child is, you’re actually doing them a disservice, creating a world of psychological trauma that will need to be undone later. It behooves you to raise them as their authentic selves. It’s not all bad, though; Diane points out that there are small glimmers of hope pointing to evolving understandings of gender.

DIANE: “Every once in a while, a boy will show up with painted fingernails. One time, I casually mentioned pronouns to one of my 11 yr old boys and he asked me what my pronouns were in return. I told him my pronouns are they/them and he was super receptive to that. That’s a sign that we’re moving in the right direction.”